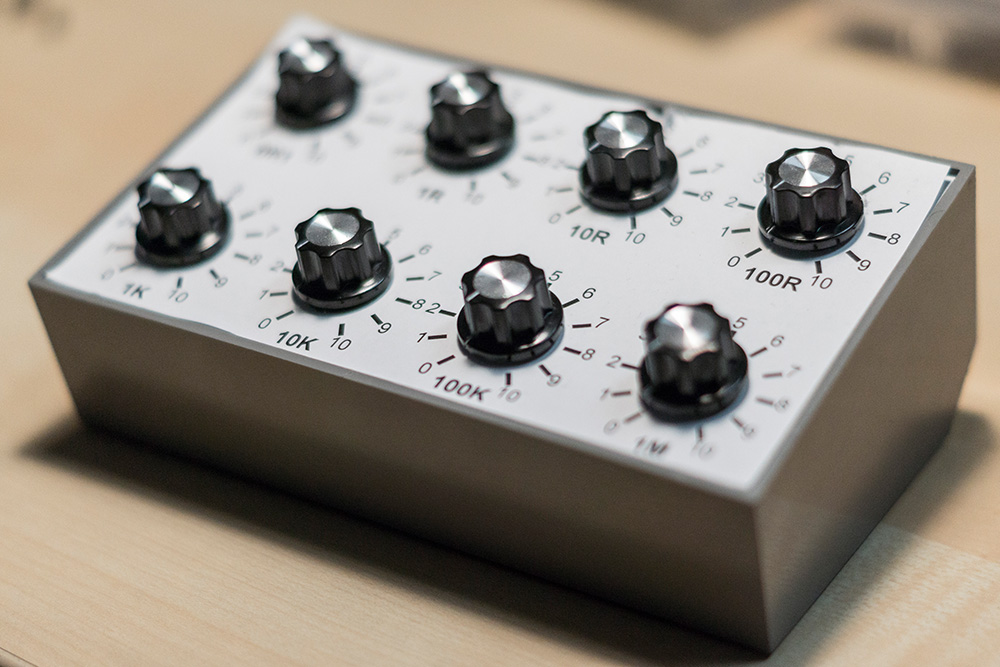 In this blog post I will explain how a decade resistance box works and will give a tutorial on how to build your own for less than 50€.

A decade resistance box is a precisely adjustable resistance and thus a usefull tool for testing and troubleshooting.

Inside a decade resistance box several resistors are connected by a mechanical switch. With each switch the resistor values go up a decade (hence the name). Turning one of the switches will put another resistor of that decade in series allowing you to precisely dial in any resistance value you need. Therefor each decade requires a rotary switch and at least 9 resistors of the same value. When using push-button switches a binary system of resistor values can be used to reduce the number of switches and resistors.

The outer contacts of the rotary switches are connected with resistors. The first position is also the input terminal and the wiper contact is the output of each stage. A 3 kΩ resistor can be realised by turning the switch to the 4th position and thus putting three 1 kΩ resisotrs in series. By combining several switches with different resistance decades almost any resistance can be achieved.

When using very small resistances the resistance of the switches needs to be taken into account.

I built a decade resistance box with 8 stages ranging from 100 mΩ to 10 MΩ. When I bought all my materials only 12-pole rotary switches where available. Also I got a bulk discount for buying at least 10 resistors. That’s why my decade resistance box has values from 0 to 10 for each decade.

I used series MF0 YAGEO resistors with tolerances of 0,1%, maximum powerd dissipation of 0.6 W and a temperature coefficient of 25 ppm/K.

For the 100 mΩ and 1 Ω ranges I used power resistors with higher tolerances to be able to use my decade resistance box as load. The VITROHM resistors have tolerances of 5% and a maximum power dissipation of 2 W with a temperature coefficient of 1000 ppm/K.

The switches I used are LORLIN 12-pole rotary switches with print contacts. They are specified with a contact resistance of less than 1 mΩ and can switch AC and DC loads up to 250 V.

I decided to use 4 mm terminal posts and put everything into a TEKO 362 desk type housing.

If you want to build this decade resistance box you can get all the materials here.

If all of the resistors are connected to the switches they can be mounted to the front panel. For drilling the holes I recommend using a stepped drill bit. When using regular drills make sure to start with a small diameter and go up bit by bit until you reach the needed diameter.

Once the switches are mounted to the front panel you can start connecting the switches with wires. The first pin of each switch needs to be connected to the wiper contact of the next switch. To reduce wire resistance use AWG 17 or lower. I used AWG 13 wire I had lying around. As a last step you can connect the terminal posts. I used third terminal for being able to connect only the 100 mΩ and 1 Ω range.